It’s a Wrap Hollywood eBay auctions, Week 3 results The third week of Star Trek auctions on eBay from It’s a Wrap Hollywood ended today with 84 of the 99 lots selling. 15 lots did not sell because they did not hit the reserve price. Several items from the first week that did not sell because they did not hit reserve were re-listed this past week. And while many hoped this meant that It’s a Wrap had learned its lesson about Reserves, those collectors were let down when the week 4 listings came out with more reserves than ever. Having talked to dozens of collectors about the auctions, I can tell you that the constant reserves are the only real source of discontent about the It’s a Wrap Auctions. The fact that two Klingon masks, one of which was listed week one with a starting price of $ 2,000, sold for just under $ 600 each, shows that It’s a Wrap greatly over-estimate’s the value of some of the items it puts reserves and high starting bids on. 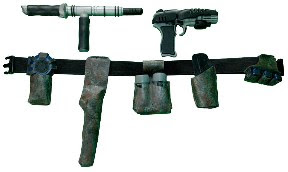 The MACO Assault Kit, an item that went for $ 3,800 (before reserve) at the Christie’s Star Trek auction in New York, topped this week’s auctions at $ 2,425. This is the perfect example that it is unrealistic for It’s a Wrap to expect to get Christie’s prices for expensive items . Some items, notably the background player costumes that are from TNG, are going at crazy prices, but overall, the prices realized are less than those realized at Christie’s. This is clearly because the Christie’s auction drew a crowd that was not just collectors, but fans as well. Here on eBay, the people viewing the items are collectors for the most part and you won’t see crazy prices for most items.

Of course, then you see that someone paid $ 2,031 for an Engineering PADD. Now it was a light up model, which is kind of rare for anything before Entrerprise, but it seems to have sold for twice what it should go for. This and the fourth highest item of the week, the Next Generation yellow command uniform, which went for $ 1,921.89 prove that some people are willing to pay way too much for some items.

The Dax DS9 black and grey costume was a steal at $ 2,030.25 . Some collectors have been paying high prices for the very desirable black and grey uniforms which have been selling at about $ 2,000 in the eBay auctions from It’s a Wrap, easily twice the price a background costume of this type should normally go for. Dana Hammontree, the winner of the Dax uniform said “That is a good price for that uniform. It is about what it should go for now that there are so many available.” Hammontree, an experienced prop and costume collector feels that the prices have been too high for props, as in the Christie’s auction. “The costumes are pretty much going where they should, with the exception of the background player costumes, which are really insane”.

Rounding out the top five items was a Klingon Warrior costume which went to Filmwelt_Berlin, the collector for Germany who has bought many high ticket items, both here on eBay and at Christie’s. It didn’t have boots, which made it somewhat incomplete. But the price was right at $ 1,827; less than half of what the lowest priced Klingon Warrior costume went for at Christie’s.

The highest priced item not to reach reserve was a Star Trek: The Motion Picture “Scotty” shirt that was the subject of much discussion. This shirt was never worn by James Doohan in TMP. And the fact that it has the wrong rank insignia is suspect. Yet it has Western Costume tags that have Doohan’s name. Speculation is that this might have been made for “Star Trek: Phase II”, the aborted second TV show that became the Motion Picture. This seems to be the most reasonable explanation. Whatever the case, the reserve not being met is ridiculous. The item is simply not worth that price considering its dubious provenance. The other pieces that did not hit reserve were not premium items, though the Cardassian costume was nice. But a reserve over $ 1,000 for it is not reasonable.

Probably the funniest item of the week was a Klingon Targ that was tied and gutted. Very cool for those collectors who never can get enough of the Klingons. Here are some prices realized and some sales that didn’t close because of high reserves:

Another 100 auctions have been listed by It’s a Wrap Hollywood this week. This week it is all Enterprise items, with a Phlox Space Suit being the premium item (and already up to $ 4,550 on Day Two!).

I didn’t win anything this past week as there was nothing that really excited me. I love the Space Suit this week, but those went for $ 8,000 before premium at Christie’s!