By LokenDecember 18, 2006UncategorizedLeave a Comment on The Christie’s Star Trek Auction – Aftermath

Well, after the auction ended, I was supposed to rush to LaGuardia Airport to catch my flight back to Atlanta. But the heck with that, we were having too much fun. I didn’t even have a place to stay, but Dave and Bill graciously offered their floor to me, and so I certainly wasn’t leaving! Denise and Mike Okuda, who had spearheaded the auction for Paramount, were hanging around and we all got photos with them. They are not only the top of the Trexpert food chain, but two of the nicest people you will ever meet. They honestly wanted all the props and costumes to be in the hands of fans as they know that is where they will best be taken care of. 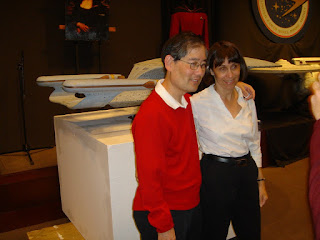 Cathy, our favorite auctioneer, as she really was the best and most engaging of the group (and she sold me my Sisko costume!) stayed around and we took photos with her as well. Here is the group in all its glory: 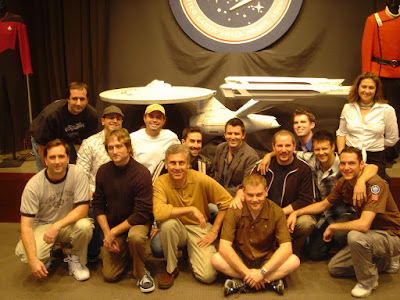 We all went out to dinner together, and I got a real education from Stephen, Andy and Tim on collecting. Rob also is a wealth of knowledge, and you can ask him about any movie and he will know something about the props. He has been doing this longer than anyone and has an AMAZING collection.

So what does the Christie’s Star Trek auction mean in the world of collecting? Well, many said it was the most significant event of it’s kind since the famous MGM auction of 1970/71. 1,000 lots sold at Christie’s for a combined $ 7.1 million. And this auction brought hundreds of people to collecting that would never bid on a prop on eBay (so full of fakes) or a Profiles in History auction. Profiles in History is a Los Angeles based auction house that really has some fine auctions and great props and costumes. (I actually bought my first prop, a Jedge Dredd lawgiver pistol, from them in 1996.) They may have a few Star Trek items in an auction, but nothing like the Christie’s event.

This event got national and international TV exposure. It was advertised for months, a selection of props took a world tour to promote the event, and CBS gave the event some impressive air time. The result was many people who were Star Trek fans, and not collectors, bidding on items. They were willing to pay more for items because they were bidding on sentiment alone without any understanding of the market. The prices paid for props were very high at times, and some were simply insane. Costumes were more sensible for the most part, and reflected other sales that had happened in recent years of Star Trek items.

But there are thousands of Star Trek items on the market now, and that will only grow as new items are auctioned in the follow up auction that will happen on eBay. Like any collectible, common items will lose value, while rarer ones will retain theirs.

The auction was a great success and I am glad I was able to be part of history. 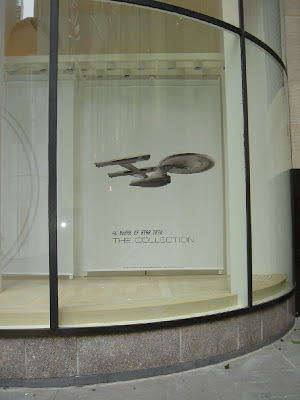